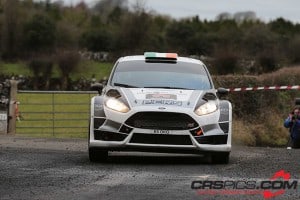 Lead by R5 convert Daniel McKenna in the P1 Rally Rentals Ford Fiesta R5 with Kevin Glynn on the notes, runner-up spot was secured by Paul Rowley and Jeff Case with Enda McCormack and Colin Fitzgerald in their Skoda Fabia S2000 completing a PCRS top three.

Philip Case – Team Principal, PCRS:
“We’ve had a great weekend here in Galway. Daniel has been a very welcome addition to the team, and his performance in the P1 Rally Rentals Fiesta R5 has been very impressive. Paul and Enda both had good run’s in their Skoda’s and it’s a very proud achievement for us as a team to lock out class five which is quickly becoming the front running class in Irish rallying.”