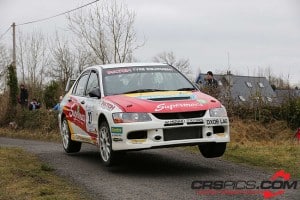 The Dublin based crew in their Mitsubishi Lancer Evo IX have been one of the main pace setters of the Group N category for the majority of the season, clocking up three class wins before clinching the title in a nail-biting finale at the Cork 20.
Four-wheel drive debutant Pauric Duffy clinched the runner-up spot in Class five in the Irish Tarmac Championship at the final round in Cork in what has been a superb year for the relative newcomer to stage rallying. Starting an exciting 15-3CRS11076journey in 2014 behind the wheel of a Citroen C2R2, Duffy made the brave step up to a brand new Ford Fiesta R5 for the 2015 season and impressed throughout. The P1 Rally Rentals supported crew of Duffy and navigator Kevin Glynn will move up to the world stage towards the end of the season with planned outings on the final two rounds of the World Rally Championship in Spain and Great Britain. 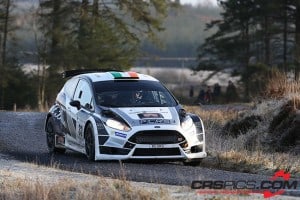 Philip Case – Team Principal, PCRS:
“Congratulations to Aaron and Paul on winning the Group N championship. They have put in a great performance all the season and the guys working on their car have also done a great job to help them achieve this title. Pauric and Kevin have come on leaps and bounds during the season. It’s been a big step up from the C2R2 but they have taken it in their stride and I look forward to seeing them improve even further next year.”

Find out more or adjust your settings.